The Ocean Economy: We Thought It Was Big—Turns Out, It’s Bigger

But before we get to that, here are a few random thoughts placed here to grab your attention.

Let’s say a company is in the menhaden business. Menhaden are awful-tasting little fish that are harvested in large numbers and processed in factories to produce stuff that is used in other factories to make dietary supplements (fish oils rich in omega 3 fatty acids), animal feed, and a lot of other final products. And let’s say that a farmer feeds his chickens menhaden-based food pellets and that some of those chickens end up in a mechanically-separated-meat machine to make that meat slurry that other factories use to make frankfurters. And let’s say you run out to lunch after reading this article to buy a hot dog.

Fish to food pellets to chickens to frankfurters to hot dogs to you. [You are what you eat?] 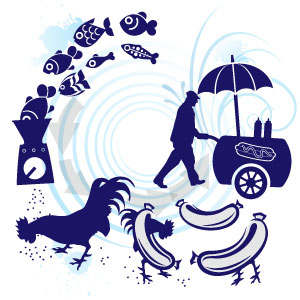 The economy works like that. It’s really rare that anyone makes anything from start to finish. In fact, I’m not sure that it ever happens. Instead, all the goods and services that we enjoy are the end products of a long line of somewhat independent processes, undertaken by a number of somewhat independent individuals and companies.

The government[1] estimates of GDP[2] account for hot dogs. But since economists are involved, they don’t just have a ledger that says “one hot dog: $3.00.” That would be too simple. Instead, they use models to figure out how much of the value of that hot dog was created by the vendor, and divide the rest among the wiener factory, chicken rancher, the food-pellet maker, the fish processor, and the fishermen.

When you do this kind of modeling for the whole economy, you can learn a lot about the complex network of independent but interrelated activities that we call “the economy.”

Sounds hard, right? But it’s worse than that. This network is dynamic—changing all the time as technology changes and as one input is substituted for another in the never-ending battle to keep costs low.

To keep up with the change, those models that the government uses to separate hot dog revenues into little nuggets of GDP have to be tweaked all the time. Every five years or so, the models get a more complete overhaul.

Which brings me to my point (yes, I do have a point). In 2013, there was a complete overhaul of the models used to produce GDP. For economy as a whole, the change was pretty minor (U.S. GDP in 2011, for example, was estimated at $15 trillion using the old models and at $15.4 trillion using the new and improved models). But among the various parts of the economy, things shifted around quite a bit.

Remember, the economy has already shifted around—the models were revised to capture this.

And finally, back to my point: all this shifting around meant that the old models missed some of the value produced by the ocean economy. NOAA’s statistics that describe the ocean economy showed that it produced $282 billion of goods and services in 2011. The updated models show that this was a little low—the updated figure is $321 billion.

If you’re interested, I’ll tell you how and why these figures changed. In my next blog.

[2] GDP, or gross domestic product, is the value of goods and services produced in the nation. These totals are broken down into estimates of the value added by each part of the production process.